After the festivities of Christmas and the NewYear are over and the kitchen has some semblance of normality, Seville oranges arrive and with them the  great marmalade making season.

I wanted to make a good batch last week and still manage to deliver a jar to Fortnum and Masons. They nobly collect any entries and send the off to the Dalemain. Homemade Marmalade competition.

I was, however, a tad pushed for time so I grasped Beryl’s  option of mincing (or as I interpreted it blitzing in a food processor) the whole oranges. I have never used this method of preparing the oranges before. So while it rather  took away that labour of love job, that I have referred to before,  that of cutting the peel to your liking, I was delighted by the speedy making and the final result was brilliant.

I used Beryl’s basic recipe for 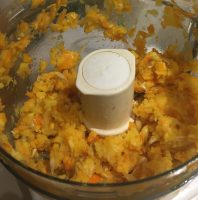 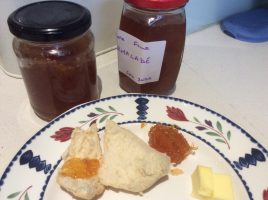 But they make delicious marmalade

That is is a brilliant way to make enough marmalade for the year, not to mention some for marmalade buns and many other uses beyond breakfast that is to say savoury, sweet, marinades and drinks. 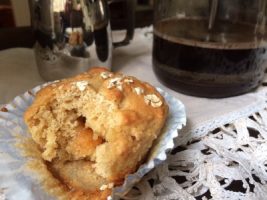 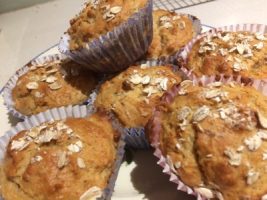 A few months ago I travelled up to Dundee. It was primarily to see the new Victoria amd Albert museum which opened in September 2018. I had always associated marmalade with Dundee but was not aware of the story for which the city lays claim to having invented the preserve.

I am going to gloss over the similar preserves made earlier by the Romans (using quinces) and then the Portuguese marmalada (also made with quinces/marmelo) in the 15th centuary and the mention of marmalade in the recipe book of Eliza Cholmondely in 1677.

This story is a far more fun

In early 18th century  a Spanish ship took refuge from a raging storm in Dundee.

James Keiller on speculation bought the ship’s cargo that included Seville oranges.  The delay caused by the storm had made the oranges less fresh than they ought to have been and Keiller’s wife, Janet, took the opportunity to boil the bitter oranges with sugar which resulted in the creation of orange marmalade.

The true story is that Janet Keiller did not invent marmalade.

Nevertheless the  couple delighted with their discovery later founded James Keiller & Son which became the leading manufacturer of marmalade in the 19th century.By the end of the 1800s, Keiller’s Marmalade was a global success and traded across the entire British Empire.

Written on February 15, 2020 at 2:23 pm, by Philippa Cardale
Categories: Breakfast, Citrus, Homepage, How to Make It, How-To Guides, Ingredients, Marmalades, Peel, Preserves, Recipes, What to Make, When to Make It, Winter   |   Tags: Dundee, marmalades, seville oranges