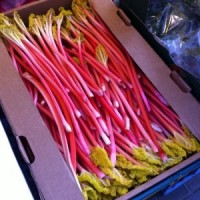 No, I am not auditioning to go on the stage but just delighted to see the early forced rhubarb has now arrived in the markets.

The forced crop is mainly cultivated in the Rhubarb triangle in the UK. It has a special flavour and pale pink colour and is more tender than the outside variety

You might decide to use one of Beryl’s recipes to preserve the vegetable.  (Strictly speaking it is a vegetable although in the USA a ruling  classifies it as a fruit.) Beryl has a range of   rhubarb jams, marmalades, jellies, pickles, chutneys and conserves for preserving as a single ingredient or combined with different fruits. Or you might choose to serve it as a pudding – a crumble or make into a slice as before with the mincemeat slice.

Just for now, I have decided neither to preserve rhubarb from this special crop nor to make the classic crumble or pudding.

Instead I look forward to cooking and adding it to calves liver meal. It is also good with chicken livers. Do consider trying  it as a vegetable accompaniment. The flavour balances well with liver and looks so pretty on a plate. 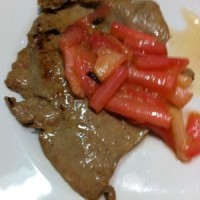 Fry rhubarb gently in small amount of butter and then add the shallots and continue frying until soft before adding the sugar and sherry to the pan. Stir in well.

Serve alongside the liver with mashed potatoes and seasonal vegetables.

The triangle covers an area of nine square miles in West Yorkshire stretching from Morley to Wakefield to Rothwell.

It is particularly well endowed with rich soil and the specialised method of cultivation includes initial exposure to frost, moving the plants indoors to warm, dark forcing sheds in the late autumn and harvesting by candlelight to exclude light.