The legend of the lemons of Menton

Menton is next to the Italian border and has its own special micro climate. It is also known for the bright yellow lemons which grow in abundance, rich in acid and essence. There is a lovely legend about the origin of the lemons grown in Menton. 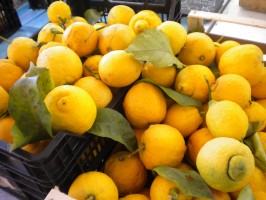 While browsing through the local market I noticed, above a lemon stall, a recipe for Lemon Confit. I love lemons with pretty well anything, with chicken or  fish or lamb, on salads and not to mention all sorts of preserves. –  but this method of preserving was new to me so on my return to London thought I would checked it out . 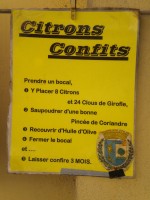 When I realised that this recipe above the lemon stall would take three months until I could reap the results, I went on the search until I found a number of ideas for making confits and tried one which will produce  (  a quicker version ) the job in a couple of weeks and WOW! 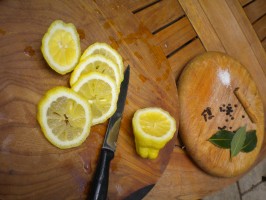 Halve the lemons and squeeze the juice into a large pan.

Thinly slice the lemons and add to the pan with the remaining ingredients.

Bring to a slow boil and simmer for 20minutes.

Allow to cool and transfer to a sterilised jar.

Keep in fridge until ready to use. 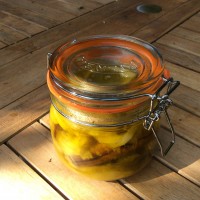 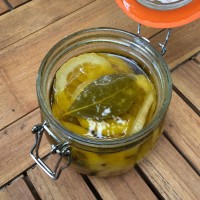 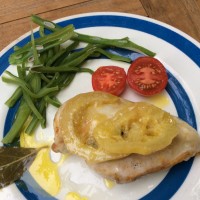 THE LEGEND OF THE LEMONS OF MENTON

The legend explains how the lemon was first grown in Menton.

When Adam and Eve were sent from the Garden of Eden, Eve wanted to leave with a golden fruit.

Adam in fear of reprisals begged her to cast it aside to which she agreed provided that she could choose where to leave it. They travelled far and wide until she gazed upon the bay of Garavan with  it’s mild climate and luxuriant vegetation.

There she buried the fruit and from this grew the lemons of Menton.