And a rich aubergine and pepper chutney 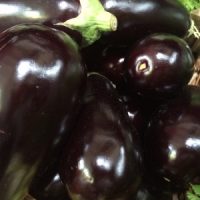 Aubergine – A food by many names

What a a profusion of  names have been given to this beautiful and shiny food. It is known as the aubergine in Europe, eggplant in the USA and Australia and the Anglo Indian name of Brinjal is also used by South Africans,  Asians  and West Indians. Other names for the fruit are apple-of-love, pea apple, garden egg, susumber and terong. In the southern United States the eggplant is sometimes called the “guinea squash”, the Hindi is baingan, and, in Italy, it is known as melanzana.

(See below the Chelsea Physic Garden note and the latin Name)

The aubergine certainly does have a right to feel confused.

Botanically a fruit and culinarily, a vegetable

The aubergine contains seeds and henceforth it is a done deal that it is a fruit, as previously exposed in the tomato blog, That at least is the botanical angle.

In the everyday use and on menus it is easier, however, to refer to it as a vegetable. They are not sweet like fruits and they need some cooking, so even the pedant around should cave in to calling them vegetables.

Well despite all this confusion the aubergine is a beautiful, and let’s say, fruit or vegetable. It is also particularly versatile and  can be prepared and enjoyed in many different ways.

First off is an aubergine recipe to be found in Lets Preserve It. The following is a rich and slightly spicy chutney. 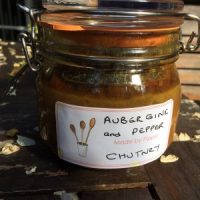 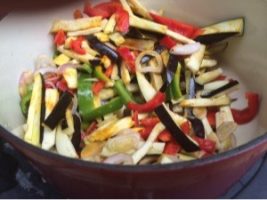 A perfect accompaniment to a cheese or meat Ploughman’s.

The following pate is my basic recipe and quite the speediest.

One  aubergine, one lemon, olive oil, salt and pepper to liking

(I live in a garlic free household, but feel free to include when adding the lemon and oil if you so wish)

Slice aubergine in half and roast for 40mins, Scoop out the flesh and put into a bowl with juice of lemon and enough olive oil for your liking. Mix thoroughly – or use a blender – and add salt and pepper to taste. Easy peasy. Dip and spread as you wish. 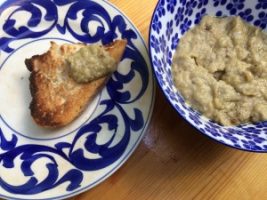 In addition to pate, dips and chutneys, aubergines can  also be served

roasted, mashed or deep fried, stewed and they

are the principal ingredient in moussaka

use as a meat substitute,

Finally the Latin name is Solanum melongenais  and The Chelsea Physic Garden currently have a walk explaining the reason, purpose and need for botanical plant names. 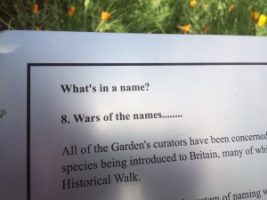 Yet another reason to visit this wonderful Garden

Written on July 6, 2016 at 9:23 am, by Philippa Cardale
Categories: Aubergine, Chutneys, Homepage, How to Make It, How-To Guides, Ingredients, Preserves, Recipes, What to Make   |   Tags: Aubergine, chutney